I don’t want to put my father on a pedestal. He wouldn’t have wanted that. He was always self-effacing, and I can’t remember him ever seeking honor for himself. When someone would praise him, he’d point heavenward, to his Creator, and give God the glory.

When he was still around, I didn’t treasure him as I should have. I assumed that all dads were as kind and sacrificial as mine. I didn’t appreciate his longsuffering nature, nor did I respect his convictions. Instead, I put him down many times, insensitive to the pain I caused him. Now, many years after his death, I realize what a jewel of a dad I had.

Papa was born in Germany in 1893 and was old enough to have been my grandfather by the time I came along. He was drafted into service during WW1, and despite frequent opposition, he continued to talk about Jesus at every opportunity.

“On one occasion,” Papa recounted, “one of the officers grabbed my Bible to look for a certain verse that he and his companions wanted to tease me with. They weren’t able to find the verse, but they did find my prayer list tucked between the pages, and read it eagerly. To their astonishment, they found their names written there.” Those rough, proud men humbly returned his Bible and apologized. From that moment on, they didn’t tease him again.

Papa also told us about an officer who had been part of the mocking crowd and often cracked jokes at my dad’s expense. On the battlefield, however, he stayed close to my father. “Why are you always hiding behind me?” Papa asked him once. “I’m not bullet-proof!” This time the officer spoke sincerely and without scorn. “There is so much peace around you. For some reason, when I’m near you, I feel safe.”

Papa’s voice would fill with emotion as he talked about a 19-year-old soldier who panicked before a major battle. Papa told the boy about Jesus—the One who faced His fears and gave His life for us—and they prayed together. The young soldier then marched bravely into the battle, knowing it would probably cost him his life. When they found his body later, his face bore the most peaceful expression. Clutched to his chest was the tract Papa had given him. The text concluded with this verse from the Bible: “The eternal God is your refuge, and His everlasting arms are under you.”[Deuteronomy 33:27 NLT]

After the war, Papa began studying to become a pastor, but had to give up his dream in order to help his parents during the financial crisis. With a family to support, he was never able to resume his studies. However, this didn’t hinder him from continuing to share God’s love wherever he went. He founded a Sunday school, and often stood in for the pastor at his local church. Visiting the sick and lonely was one of his favorite pastimes.

I was the youngest of six children. When I was small, Papa and I adored each other and spent countless precious moments together. But when I grew older and turned my back on God’s love and the faith of my parents, it broke Papa’s heart. I barely communicated with him during my teen years, as I didn’t want to hear any of the sermons I expected him to preach.

So Papa opted to remain silent, while Mom and I argued a lot. “Why do you talk so much with our daughter?” Papa would ask her. “It might be better to talk with God about her!” Sometimes my heart cringed at the way he would look at me, his eyes full of sorrow. Our sweet father-daughter relationship had faded, and he found the hurt hard to bear. I felt miserable too, but didn’t want to admit it, so I put on a tough front.

Papa talked to God about me, and God listened. At the age of 21, I experienced a miraculous transformation. Like a prodigal daughter, I returned to Jesus and asked Him to come into my life. Papa was so glad. What a joyful reunion we had! Mom told me how over the years he had not ceased to pray desperately and with determination. Thank you, Papa, for holding on for me.

When Papa passed away, a short article about him appeared in a local newspaper. It concluded, “It’s a rare thing to encounter such heartfelt kindness and patience as Mr. Gruenhage showed to others. Those who met him could feel that ‘he had been with Jesus’ (Acts 4:13).” In his own humble way, Papa was a saint—the sort that heaven is made of. 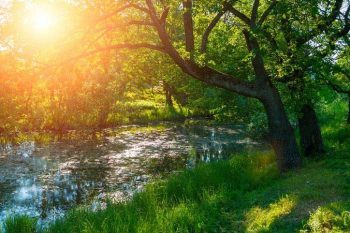