Christians aren’t immune to difficulty—family problems, fears, uncertainty, too much to do, financial pressures, and so much more. Having faith doesn’t keep us from difficulties, but we who know the Lord can avail ourselves of His promises, which can get us through those difficulties.

I want to share a few of the things that help me to keep going when things are rough. These are part of my personal survival list.

First, I remind myself that I’m not alone in going through difficult times. It’s been said that “adversity builds character” is the A-B-C of spiritual growth. All those who have done great things for God and mankind have experienced difficulties and had to overcome all manner of obstacles. It’s through their struggles that they became strong.

Think of the example of Joseph, one of those whose character and potential were forged in the furnace.[See Genesis 37–46.] As William Secker [William Secker (died c. 1681) was a Church of England clergyman and religious writer.] put it, “If Joseph had not been Egypt’s prisoner, he would have never been Egypt’s governor. The iron chains around his feet ushered in the golden chains around his neck.”

Something else that helps me to carry on is to pray for greater faith. There are scriptural examples of praying for faith, and I know God always answers the hungry heart. “Immediately the father of the child cried out and said with tears, ‘Lord, I believe; help my unbelief!’”[Mark 9:24] In another instance, the apostles asked Jesus to increase their faith.[See Luke 17:5.]

When I feel too weak to pray for myself, I ask others to pray for me. When I’m having a tough time, I’m thankful that I have people who can support me in prayer, people who I can go to, knowing that they will give me the gift of their time and concern by asking God for strength and faith on my behalf.

Next, I review past experiences of how God has come through for me. Never once has He failed to bring me out of the storm and into a peaceful place in His time. Focusing on all that God has done in the past helps me believe Him for more good things to come. I know from personal experience that no matter how bleak the situation, God is able to do miracles. He’s not limited by circumstances.

Additionally, reading or listening to testimonies of how He has never failed others is also a tremendous inspiration and strengthens my faith. Learning about the wonderful things He has done for fellow believers throughout history gives me the assurance and peace that He will do wonders for me as well. Another thing that helps me a lot is to look beyond the present difficult circumstances and try to believe that things will get better, because I know that God cares, that He’s going to bring me through, and that He honors me for having that trust in Him.

This reminds me of the story about a father and his little daughter who came to him one day asking for a dollhouse. The father nodded and promised to build her one, then returned to his book. Soon he glanced out the window and saw her, arms filled with dishes and dolls, making trip after trip until she had a huge pile of her toys in the yard. He asked his wife what the little girl was doing. “Oh, you promised to build her a dollhouse, and she’s getting ready for it.”

“It was like I’d been hit by lightning,” the father later said. “I threw aside that book, raced to the shed for supplies, and quickly built her a dollhouse. I didn’t do it because I necessarily wanted to or because she deserved it, but because I had said I would and she had believed me and acted upon it. Her faith in her father’s word made it impossible for me to let her down.”

That’s how our heavenly Father is with His children too. The fulfillment of His promises doesn’t always happen immediately, but He always answers in His perfect time and according to His purpose.

So those are a few of the things that help me when my head is barely above water and I’m ready to panic. When I incorporate these principles and practices into my daily life—even if it’s just through my thoughts—they activate my faith and it goes from being theoretical faith to living faith. 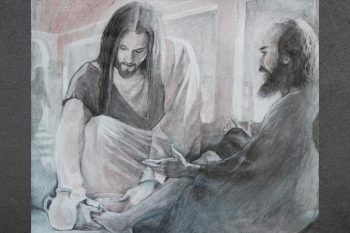 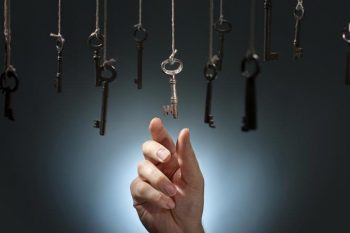 The key of simplicity