I don’t remember the first time we met; he just always seemed to be around when I was growing up. My parents made a point of inviting him to join us on summer vacations and practically every other family event. We used to walk to and from school together—we were quite close back then and talked a lot.

When I got older, I began to feel annoyed and imposed upon. I wanted to make new friends and have new experiences, and he was an embarrassing reminder of my past. Eventually, I decided I simply couldn’t have him hanging around anymore and told him that I needed a break.

I don’t remember what he said, but I remember the hurt in his eyes. He agreed to give me space, and I felt liberated for a while, finally getting to travel on my own, meet new friends, and build memories that didn’t include him. Every so often, his face would pop into my mind and I’d wonder what he was up to, but I tried to avoid dwelling on the subject. Sure, dumping him was hard, and I felt a bit guilty for how things had gone down between us, but … what to do?

Once, I thought I caught a glimpse of him on a crowded street. Another time, I had to stare closely at a beggar at a corner, as I thought for a moment that I recognized something in his face.

Then one day I went to watch a new musical with some friends, and to my surprise, there he was—on the big screen! Somehow I’d missed him becoming a superstar, but there was no mistake—it was him up there singing, dancing, and oh so cool! Incredibly charming and attractive, but also brave, unconventional, and compassionate. 1

As I watched, my heart was overwhelmed by all kinds of emotions, some new and some I recognized from our previous life together. I really must not have known him as well as I thought I did. Or have I changed?

It wasn’t long before we bumped into each other. His happiness to see me and his warm, loving hug erased all the misunderstandings of our past, and suddenly everything made sense again.

Since then, we’ve renewed our relationship and spend as much time together as we can. I’ve gone back to thinking he’s the most fun, adventurous, and tender person I know. We still experience ups and downs, but I can’t imagine a life without my best friend, Jesus! 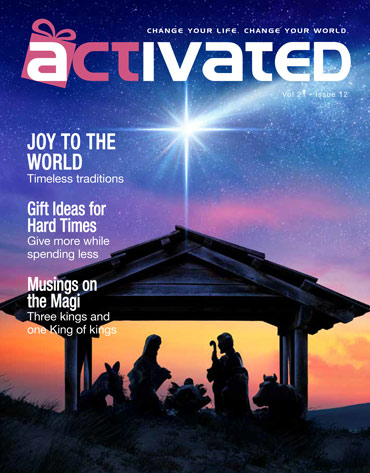 Joy to the world

My gift to you