They’re not coming back!

I remember how I felt when it finally hit home. Alone. Afraid. Unsure. For years I had been working on a social service project in an impoverished South Asian nation. I was busy and made a contribution to the work, yet it didn’t depend upon me; I was a cog in the overall machine, and that suited me just fine. I felt secure benefitting from others’ years of experience, not to mention their financial backing. There wasn’t much for me to worry about.

Then, over the course of one summer, everything changed. Suddenly my coworkers’ plans were radically altered due to health problems and their children’s educational future. They moved away, and the projects were left in my hands. That is, if I could keep them going.

I knew I would have to take a hard look at the situation and reflect on the future of the work we had been doing. The next few months were secure—they had left resources enough to make sure of that. But beyond? I had no idea.

Around the same time, I fell sicker than I had ever been. For over a month, I was mostly bedridden, barely able to eat. In some strange way, my state of complete incapacity because of the illness prevented me from succumbing to hopeless worry, as I would normally have done. I was simply too sick to give in to fear. It was all I could do to make it through each day and night; I had no strength left over for worrying. And while I was incapable, God remained strong and He worked on my behalf.

As time passed, there were no major changes or interventions, but there was always enough. Donors to help with the social projects. A job when I needed it. When one door closed, another opened. I had always valued security, but in this time of change and newfound independence, I discovered a different kind of security and happiness. I finally came to a firm decision: For as long as I could—as long as God helped me—I would keep the work here going.

Life is challenging and unpredictable, but I am happier than I’ve ever been. I believe that God can work things out even when there’s nothing we can do to help Him. How could I not believe this, when that’s what He did for me? 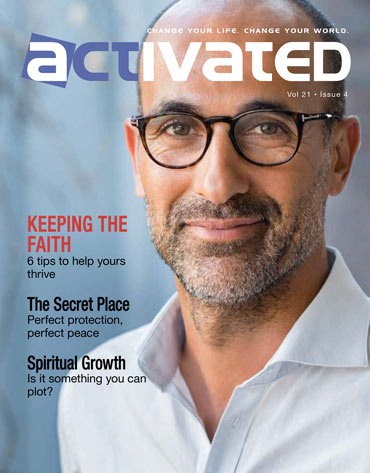 The violin and the broken string

How to run from waves

The measure of faith